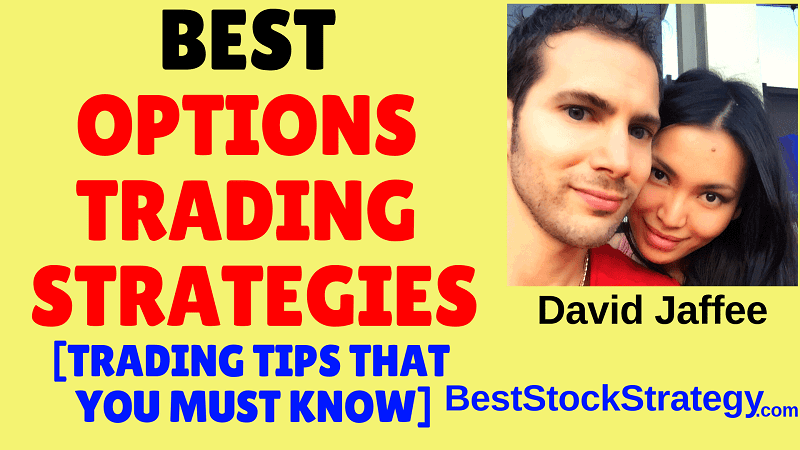 Plus, I discuss how to ensure that almost every trade is a winner.

Many people buy calls and puts; that's gambling, not investing.

Selling option premium is the only predictable and consistent way to make money as a trader in the stock market.

Selling options is your best way to increase your income because the majority of options expire worthless.

This guide is meant to be an option strategies cheat sheet.

I highly recommend selling puts because the stock market has a “long bias”, meaning that it goes up more than it goes down.

While people are oftentimes scared of “black swan” events and market crashes, you can easily protect yourself against a stock market collapse by trading small and also selling puts with a strike price that’s ~10% below the current price of the underlying.

When people buy 100 shares of Facebook, they don't automatically assume that it will go bankrupt.

As a result, it's strange that people say that selling naked options is risky when it's much less risky than buying stock.

Selling options is much less risky than buying stocks. Those who claim otherwise are likely not profitable traders

Naked puts: Let’s say that Facebook is currently trading at $210. We can sell a put contract with a strike price of $180 that expires 6 weeks in the future.

In exchange for agreeing to buy Facebook if it falls below $180, we receive a credit (“option premium” or “premium”) of $2 / share.

If Facebook trades above $180 at the time of expiration, our option expires worthless and we keep the entire $200.

In this trade, our break even point is $178 (excluding commissions), and as long as Facebook stays above $178 then this trade will be profitable.

In the past, I preferred selling naked puts because it’s simple, has low commissions, maximizes the premium received, protects against trading too many contracts and it offers a lot of flexibility when rolling the contracts (more on this later).

However, late 2019 and in 2020, I have primarily begun selling spreads. The reason is that I believe that the enhanced capital efficiency, plus the tail-risk protection, outweighs the additional premium and trade management advantages.

For smaller accounts, selling naked puts may not be capital efficient because it uses up a lot of buying power (so you'll have to trade spreads).

Vertical credit spreads: Let’s say that Facebook is currently trading at $210. We can sell a contract with a strike price of $180 that expires 6 weeks in the future. In exchange for assuming the risk of buying Facebook at $180, we receive a credit of $2 / share.

This is very similar to the sale of the naked put.

To make this trade a spread, we also buy a contract with a strike price of $170 that expires 6 weeks in the future. In exchange, we pay $1 / share.

There are two primary advantages of selling a vertical credit spread:

Don’t worry if this doesn’t make sense at this moment. It’s not rocket science and once you’re exposed to vertical credit spreads with greater frequency, you’ll naturally begin to understand it.

By selling naked puts, your maximum loss would occur if Facebook went bankrupt and fell to $0.

As a result, you’d have substantially greater potential risk by selling naked puts (although we both have a better chance of getting hit by a car tomorrow than Facebook going bankrupt).

Since you can lose $17,800 for every naked contract of FB vs. $900 for every vertical credit spread contract, your online brokerage firm will limit the number of naked puts that you can sell to adjust for the maximum loss difference.

In my opinion, the best options trading strategy is to sell vertical put credit spreads.

Why I USED to Prefer Selling Selling Naked Puts

So why did I prefer naked options?

Because your expected return is substantially higher when trading naked options.

There are numerous reasons why trading naked options were attractive to me:

Remember, we only get paid by selling premium!

Many traders are tempted to sell 5x - 10x as many vertical contracts to collect more premium since their broker allows them to trade substantially more spreads than naked options.

This is the biggest mistakes that options traders make.

Let’s say that Facebook falls close to my strike price, with a naked put, I can easily “roll” that position by buying back the original $180 put and selling a $175 put with an expiration date of 2-3 weeks in the future.

This can usually be done for a credit (meaning that I’ll receive money even though I have also reduced my risk by agreeing to buy Facebook at $175, or $5 less than before).

With the vertical credit spread, if Facebook falls, I’ll have to buy back the original $180 put, sell the original $170 put and then roll out both legs by 2-3 weeks.

This is much harder and more expensive to do because the long protective put will be very expensive and I'll have to allocate the time premium that I receive towards buying another protective put option in the future.

In many cases, the time premium would serve me a lot better if it was allocated to reducing the size of the position or rolling to a more favorable strike price, instead of buying the long put option.

Also, because my original credit was less ($100 / contract for the credit spread), my break even point is also higher for the vertical credit spread ($179) vs $178 for the naked put.

The biggest mistake I see traders make is they trade too large.

If you can sell 5 naked options, then you shouldn't trade 30 spreads (but some people do, and they eventually end up losing money).

Vertical credit spreads are especially useful when dealing with expensive stocks such as Amazon and Google which trade for $1,000+ / share and selling a naked put requires too much buying power.

Click Above for a Video on the Best Options Trading Strategies

I trade spreads because of the defined risk characteristics (you have a defined maximum loss when entering the trade).

The only time I'll consider trading naked options is when the underlying stock price is below $150.

The way we setup trades permits us to be profitable 95%+ of the time. As a result, the biggest challenge is not whether you'll make money on a trade (because that's almost a given).

Instead, the biggest challenge is managing your size and buying power to ensure that if a trade goes against you, you're able to "bend but not break" so that you don't have to close out that position for a loss.

Let’s assume that we’ll mostly sell vertical put credit spreads, a logical question (using the Facebook example above) is: why would would anyone risk $900 to gain $100?

​And the answer is…the odds and expected outcome are strongly in your favor.

If that occurs, we'll roll the position forward in time until it expires worthless.

As a rule of thumb when trading stock options, if your position gets tested, you should roll out (extend duration) for a credit and either reduce your position size or improve your strike price.

Facebook is one of the largest companies in the world. If it happens to trade below $180 then as long as I continue to roll the position forward in time (and receive money every time I do so), then eventually Facebook will likely rally above $180 and that position will expire worthless.

While I never recommend taking ownership of stock – I never want to own actual Facebook stock and would prefer to roll the position until it expires worthless – I recommend only selling puts on positions that you wouldn’t mind owning.

For example, if I would like to own 1,000 shares of Facebook at $180 / share, then I'd be better off selling 10 put contracts of FB with a strike of $180 (as long as the premium received is high enough) because I will receive money ("option premium") in order to open that position.

And that’s why everyone should risk $900 to gain $100: the probability of profit is extremely high and, even in the worst case scenario, you can roll out the position to continuously increase the amount of premium received while also reducing your risk.

This is why selling vertical put credit spread options is my favorite options trading strategy and trading options is the most successful options strategy.

Making money in the stock market is all about estimat