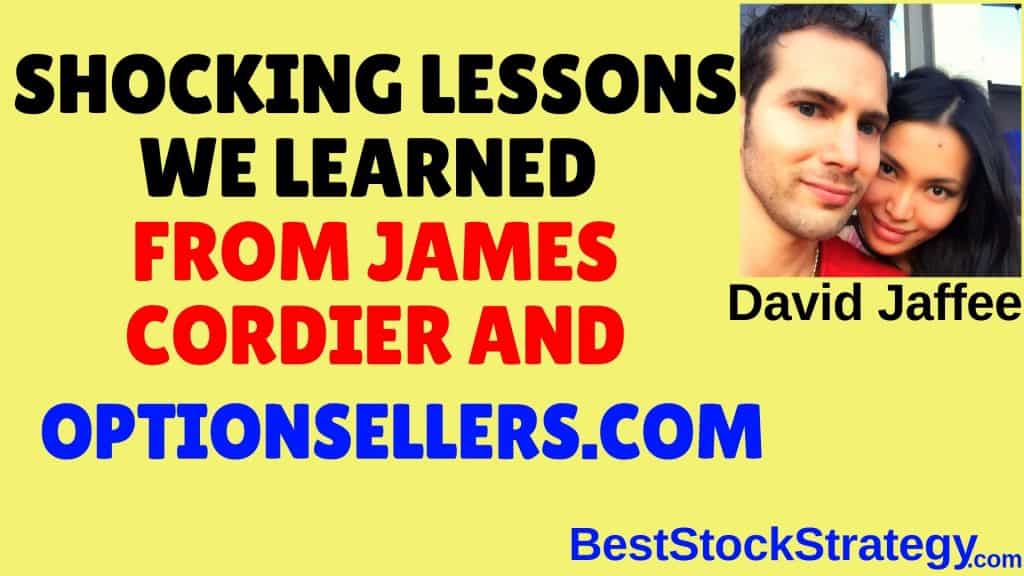 Everyone’s been talking about optionsellers.com, the hedge fund that lost a staggering $150+ million dollars of clients’ money by being short calls on natural gas.

Optionsellers sold options and blew up.

Optionsellers was a hedge fund with ~$150 million dollars in assets.

What’s interesting is that their management (and quality control / oversight) was ineffective for a hedge fund.

The fund was run by James Cordier, often referred to as ‘’the options king’’, or the "king of options."

People who partake in option selling tend to sell option premium, which is an amazing strategy.

However, OptionSellers.com blew up and there are a couple of main reasons behind it.

Instantly Be a Successful & Profitable Trader

What Went Wrong With Optionsellers.com?

The first reason is greed. When selling option premium, you can manipulate the trades to have them be profitable 90% - 95% of the time.

However, even if you’re profitable 95% of the time, if your trading size is too large, then those 5% that go against you can result in losing a large amount of money because you'll run out of buying power and be forced to close your positions.

This is what happened with OptionSellers.com and it's actually more common than you'd think with beginner traders.

It's common for students to win ~98% of their trades, however during large volatility expansion events like March 2020, it's possible to get placed in a margin call and be forced to close positions for a large loss if you're trading too large.

It's natural for people to become overconfident when they're winning all their trades and start to think of option selling as "easy money".

After winning almost all their trades, ~3% per month is no longer enough. Instead, traders take on more risk and try to earn ~15% a month by selling strike prices that are too close to the current market price - or they sell too many contracts.

When their positions start going against them, they are unable to roll and manage the positions and profit from a volatility contraction.

Instead, they are forced to close the positions for a loss.

By trading too large and getting greedy, a few of my students were no longer able to defend their positions in March 2020.

They traded too large & got greedy

OptionSellers.com became complacent and traded too many contracts. They simply got greedy, lacked discipline and got caught.

Natural gas went up ~60% in ~2 weeks. This is an extremely large move that is very rare. Even so, while a ~60% move is unlikely, it happens occasionally. Had OptionSellers.com traded smaller, they actually would have made money from their position because natural gas prices collapsed quickly.

Commodities are small markets (usually just a few billion dollars) and have the tendency to lack two-sided price action. As a result, they can go up (or down) ~10 days in a row regularly; this situation is more rare with stocks.

OptionSellers made the same mistake as a few of my students.

Since OptionSellers.com was used to winning all their trades, they got greedy and started trading too big.

Because of their greed, they were choosing strike prices that were too close to the current market price.

Plus, their their size was about 10 times larger than it should’ve been.

"OptionSellers.com got used to winning all their trades and they got greedy and weren't disciplined. As a result, they blew up." - David Jaffee, BestStockStrategy.com

Why Are Commodities Risky for Trading?

In James Cordier's case, natural gas went up to ~60% in 1 - 2 weeks, only to collapse shortly thereafter.

When trading commodities you have to be aware that they’re inherently a lot riskier than equities.

However, with a commodity, even though it’s a liquid market, it’s still relatively small.

The natural gas market is probably not much larger than $5 - $10 billion dollars, or perhaps even smaller.

As a result, volatile moves on both the upside and the downside are not uncommon.

This is exactly what happened with natural gas. During a 1 -2 week time period, it increased in price by ~60%.

This price action is not uncommon with commodities.

We can safely conclude that commodities are extremely volatile. That’s one of the reasons why I avoid trading them.

Occasionally, I do trade a small amount of gold because it’s uncorrelated with the overall S&P 500. But even when I do trade gold, I trade options on the GLD or the GDX, not the actual commodity itself in the futures market.

What Can You Do to Avoid the Mistakes that OptionSellers made?

When trading gold, I tend to take a very small position.

One of the reasons OptionSellers.com got burned is because they traded commodities which have a history of being volatile.

Also, they simply got unlucky.

When trading commodities, there is a higher possibility of getting unlucky. You should be aware that, even though you’re going to win 95% of your trades when you sell options, there’s still that 5% of the time that you’re going to lose when trading options and you need to learn how to control your risk.

You have to plan accordingly and avoid trading too many contracts.

OptionSellers.com would still be open if they traded 10% as many contracts as they did.

Actually, not only would they still be open, but their original position would have made them money.

After OptionSellers.com collapsed, the price of natural gas fell.

But Option Sellers traded about 10x as many contracts as they should have traded, and they paid the price by losing their hedge fund.

Bad luck definitely played a part. Natural gas is probably not going to experience a move of that magnitude during the next few years. It just so happened that optionsellers.com was on the wrong side of the market. They were overexposed which caused the destruction of their hedge fund.

Retail traders don’t have a choice.

If they want to make consistent profits in the stock market then they need to learn how to sell option premium.

The only alternative would be to hold an SPY index and earn about 4-5% per year.

If you're interested in learning how to sell options premium then you can learn more about it here.

That means that, if an individual just held the SPY ETF index, they would have beaten close to 99.9% of day traders!

You need to learn how to sell option premium if you want to be profitable.

But... unlike OptionSellers.com, you need to be disciplined!

Conclusion: Why Did OptionSellers Hedge Fund Blow Up?

You don’t have a choice if you’re looking to achieve alpha and achieve outsize gains in the stock market. You have to sell option premium.

If you decide to do so, learn from James Cordier’s mistakes. Remember to NOT get greedy and, if you choose to trade commodities, trade them very small.

Learn from the best traders and teacher, take our online courses to improve your knowledge and experience.

What happened to optionsellers.com is not common, however. It’s just a perfect confluence of multiple factors that led them to bankruptcy.

That’s what happens when you get careless and greedy.

How much money did James Cordier lose?

The hedge fund lost around $150 million of their clients' money, and David Jaffee breaks down where Option Sellers went wrong.

How did James Cordier lose money?

Cordier bet that natural gas prices would go down while crude oil prices went up. The reverse happened, and just like that, his clients lost at least $150 million. "Needless to say, the events of this past week have been incredibly devastating,'' Cordier said in a flat-voice apology on YouTube.

Do you have another article about James Cordier and OptionSellers?

Yes, here is another article about James Cordier and OptionSellers

About the Author David Jaffee

I (David Jaffee) help people become consistently profitable traders while minimizing risk. I graduated from an Ivy League University and worked at some of Wall Street's most successful investment banks. Subscribe to my YouTube channel for valuable videos - BestStockStrategy YouTube Channel​. Finally, if you're looking to Land a Finance Job, then I've put together the best step-by-step course at LandaFinanceJob.com. My personal website is DavidJaffee.com.

Options Trading Example: How You Can Make $1 Million a Year Trading Options

Options Trading Tips and Tricks: The Truth About Profitable Trading

Please log in again. The login page will open in a new tab. After logging in you can close it and return to this page.